I happened to stumble recently on ForwardEmail.net, a slick, free service that allows you to have email addresses for your domain, but without having to pay for or manage full email service. Instead, messages are simply forwarded to whatever existing email address you already have (GMail, Hotmail, Fastmail (save 10% with that affiliate link, btw), whatever).

Suppose, for example, you run the site IndivisibleMaralago.com. With this service you could have a working email address like info@indivisiblemaralago.com forwarded to an existing email like trumpisbad12345@gmail.com. You can have as many of these aliases as you want, for free.

Why not get real email service for your group? You can sure do that, and it might make sense. But I’ve been involved with managing email for nonprofits in the past, and it can be a real pain in the butt, with little real advantage. There’s a good bit of administration and frequent troubleshooting, all so that the already-busy leaders of your group can juggle yet another email account.

If the main thing you want is the legitimacy of email addresses with your domain name so that people can send you messages, this ForwardEmail.net solution is easy and free. If you decide to upgrade to a full email service provider later, this is easy to turn off and won’t hinder that process a bit.

To be clear, you don’t need me or a site on Indivisible.blue to use this. You can go to ForwardEmail.net and do it yourself, no problem. But if your site is hosted here, then we probably manage your DNS already, and that’s where the configuration for this service happens. Also, I’m here as always to help you set up and manage it! Just tell me what email address you want, and where it should go, and I’ll take care of all the technical details.

If you’re interested, just get in touch via this form (or via this new forwarded address I just set up: hello@indivisible.blue!).

Many of the sites we host here on Indivisible.blue are full, primary group sites. They serve Indivisible groups in a city, district, or even state. But because we have the ability to create a new site quickly and easily (and for free, not counting domain registration), there have also been a few special-purpose sites set up. The most recent of these is a great example: WhoIsChipRoy.com.

The activists behind this site have already been getting the word out about it this primary season, from yard signs (below) to promoting it a candidate forum attended by the Democrats hoping to take on Mr. Roy in TX21 in November. That event’s coverage in Austin’s alt-weekly, the Chronicle (“Dem Candidates Wendy Davis & Jennie Lou Leeder Take the Stage”) even included a mention and link to the WhoIsChipRoy.com website.

Interested in an issue- or candidate-specific site? Get in touch! 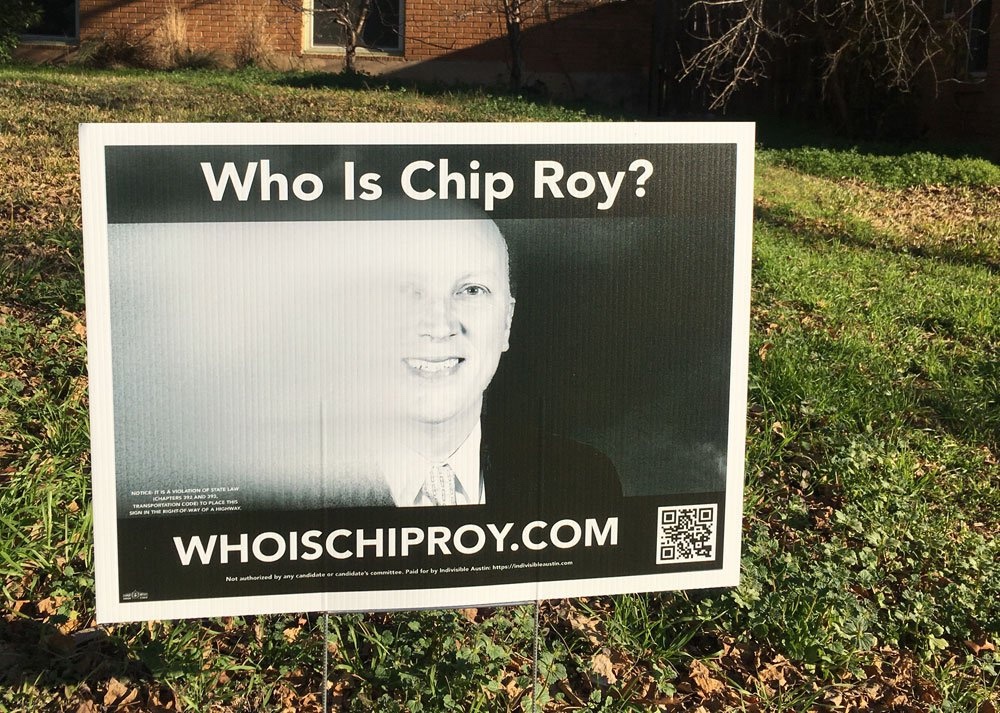 I appreciated this advice and pep-talk from Jon Lovett of the Lovett or Leave It podcast (you can listen to the clip transcribed below here):

And I just want everybody who can to take a break this holiday. Turn off your phone if you can, tune out as much as possible, sleep late, download a meditation app, sign up for the subscription then never use it again. Do some yoga, ’cause when we wake up on January 2nd, we need to look at that calendar and find a weekend, two weekends, ten weekends, plan a trip to the closest swing state near you.

Enjoy your Christmas. Enjoy your Hanukkah. Enjoy your New Year’s, because 2020 is going to be a long year and the closer we get to the election the more the stakes will weigh on all of us, and I just want us to keep in mind, all the twists and turns, all the emotional highs and lows, all of it will fade when we see the results. And when we’re watching those results, we won’t be in control of what happens, but we want everyone listening to this, eleven months from now, to watch those returns knowing they did all they could to get the results that we wanted.

So, eat up this holiday break, have a great time, because 2020 is the year America hits its goal weight!

I plan to follow this advice, and hope you will, too. Happy holidays, and here’s to 2020!

It boggles this WordPress network operator’s mind that people can be presented with a fraction of the evidence and testimony that’s come out so far and somehow claim that Trump’s actions are not impeachable offenses. Rolling Stone has an excerpt from Leah & Ezra’s book We Are Indivisible: A Blueprint for Democracy After Trump, including a mention of some of us in Texas:

Order your copy today (proceeds go to Indivisible’s Save Democracy Fund), and keep up the fight! 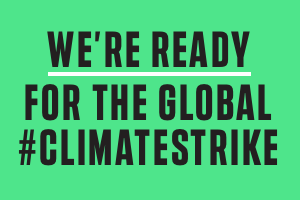 Via the resistance developers at Ragtag, I learned that Fight for the Future is helping provide tools to let you digitally join the climate strike. On their site you’ll find social media resources, banner ads, and lists of other participants.

The WordPress plugin listed there is installed and ready to use for all sites on the Indivisible.blue network. Just activate it on the plugins page, and enable the footer and full-page widget settings as you like. Contact me by form or email if you have any questions or run into any problems.

We spend a lot of time focused on which Democratic candidate to nominate, but none of this will matter if we don’t focus a hell of a lot more on what may be the greatest vulnerability that Democrats face in 2020: the Republican War on Voting.

Here’s the good news: Stacey Abrams is on the case, and she’s got a plan. Because of course she does!

It’s called Fair Fight 2020, and it’s an unprecedented effort to hire voter protection teams in 20 battleground states who can ensure that every voter is registered, can access their ballot, and has their ballot fairly counted.

But she needs our help.

Donate and spread the word: votesaveamerica.com/fairfight2020

There are plenty of problems and things to worry about with Facebook, Twitter, and any other social media sites you may use. Data privacy, addictive behaviors, concentration of power, the list goes on and on.

One approach, which has been around for years but is still relevant today, is called “POSSE”, defined by its proponents like this:

POSSE is an abbreviation for Publish (on your) Own Site, Syndicate Elsewhere, a content publishing model that starts with posting content on your own domain first, then syndicating out copies to 3rd party services with links back to the original on your site.

The idea is simply that you should have your own independent web site (hosted here on Indivisible.blue, for example), and it’s the primary source. It’s fully under your control in terms of ownership and content, and it’s on the “open web”, that doesn’t require anyone to have a login to anything. Links to items on your site – events, news, calls to action, the Trump Outrage Du Jour, kitten pictures, whatever – can then be shared on whatever Facebook page, Twitter feed, or Medium thing you want.

This cross-posting can be accomplished in a number of ways. WordPress and Jetpack provide connection to the primary sites, and the indie-web network Micro.blog also provides syndication (as well as simple, inexpensive hosting).

Own and control your content, even if you still feed it to the social media beasts. If you have questions or suggestions on this, don’t hesitate to let me know.

For your plugin pleasure, we’ve recently installed a few new tools based on site admin requests:

I hear occasionally from groups that are considering, or have already tried, using the heavily-advertised website hosting service “Wix”. It’s a tool, and if it works for you and your budget has the $150/yr (for the minimum plan), then it may be fine. I believe it’s important to have an independent website presence, apart from just a Facebook page or Twitter account, so in my book a Wix website is better than nothing.

That is an expense, and not just this year, but for every year that anyone wants to keep that site going. And here’s where a big downside of their service becomes clear: you can’t take your site with you when you go. It’s called vendor lock-in, and it means that if you ever decide you’d rather host your site elsewhere, then you’ll essentially have to rebuild it from scratch.

From Wix’s own support article on “Exporting or Embedding Your Wix Site Elsewhere”:

Your Wix site and all of its content is hosted exclusively on Wix’s servers, and cannot be exported elsewhere.

Specifically, it is not possible to export or embed files, pages or sites, created using the Wix Editor or ADI, to another external destination or host.

This is a big reason I built Indivisible.blue on WordPress. It’s an open community, built on open source code, so it’s not only free, there’s also no vendor lock-in. You can export your entire site and move it to another WordPress provider whenever you want. Or if you already have paid WordPress hosting somewhere else, you can move it here, with minimal effort. And because WordPress is so common, open, and easy to work with, other website software often supports the WordPress export format, too (Squarespace is one example, Micro.blog is an even better one).

Don’t put all your web eggs in someone else’s proprietary basket if you don’t have to!